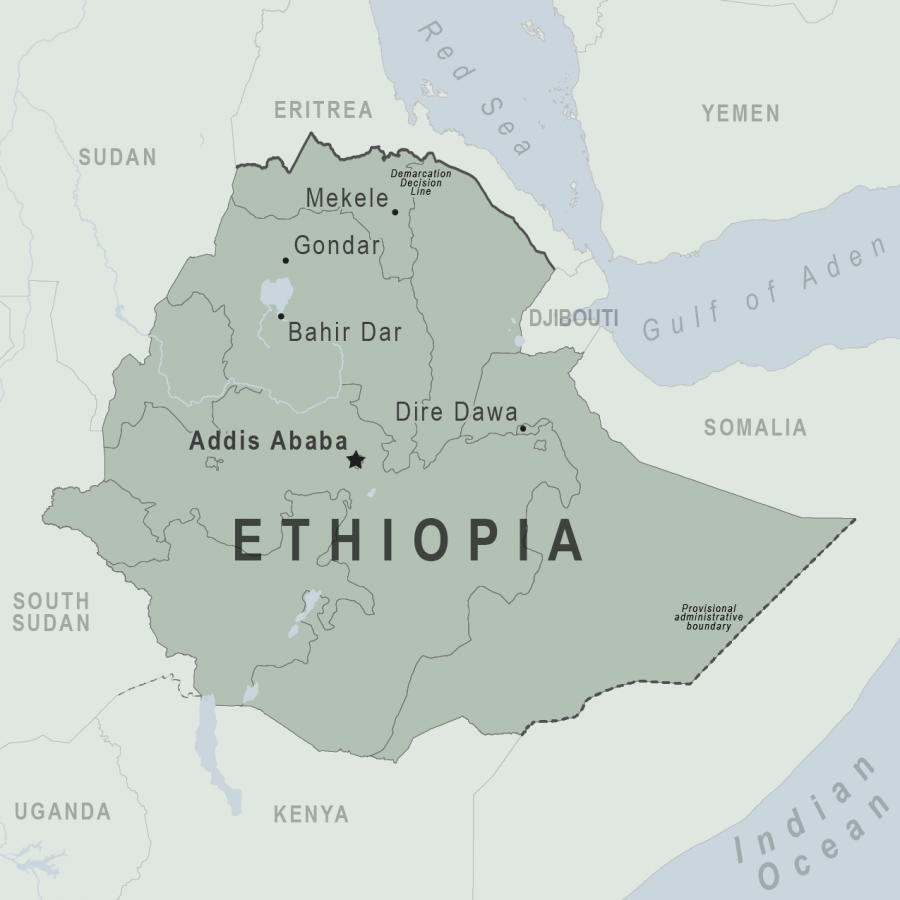 Photo Courtesy of the CDC

A majority of the time, traditional music that is played with instruments that are handcrafted in either Ethiopia or other African countries. One of the most popular instruments is called the maskino which is taught to most people at a young age. To the right is a photo of a man playing the instrument. The masinko is similar to the fiddle as it is played with a bow rubbing against the single string. I found it interesting that when it is played, the audience will say poems or lyrics then the musician will repeat the words directly back to the audience.

A very well known dance known as Eskista, had originated in Ethiopia and is known throughout the majority of the tribes. This dance can be performed by both men and women, along with even the children. The name Eskista specifically means -dancing shoulders- as this dance seems to mirror the movements of snakes, with shaking movements of the shoulders, chest, and hips. The movements of the dance are not always exactly the same, but instead go along with the music playing in the background. Dance – Eskista Ethiopia

The main reason it can be danced to different music is because it usually relates back to a person’s beliefs, gender, or daily life and each person has a different story to tell. The dance would usually be performed to traditional Ethiopian instruments, however recently the dance has been played to a more modern type of music. The dancer is able to portray a symbolic message to the audience when performing which influences the culture of each individual . The Eskista is generally danced to quite often as people get together. It is primarily seen to be danced at weddings, religious ceremonies and on holidays. History of Eskista₁

For this dance in particular the clothes that are worn while dancing also say alot about the performer. The clothes that they wear give insight to where they are from regionally. When dancing in clothes of cotton, white, or worn out clothes, the dancer is from the north. The typical outfit is known as a shemma for the northerners. Two specific tribes this relates to in the north, for the most part, would be the Amhra and Tigreans. When wearing animal skins and hides, the dancers are usually representing the south or west. The southernmost part however they wear bright colors with multiple patterns and designs, and the males are additionally wearing fur hats. All in all everyone usually wears an extra garment that looks like a cloth belt in which they dance with. History of Eskista₁

I feel as if this can be compared to the way that we in the U.S. host dances at weddings and large gatherings as a way to express our joy. Just as we dance to show our happiness and joy, they dance to show their emotion as well. In opposition, Ethiopian dances are different from ours as we do not have certain motions/movements such as when in Ethiopia they move only their head or shoulders. I think it is neat also to take note that everyone in their tribes are able to participate in the dances because everyone knows exactly what to do which shows a major connection in their community. It was nice to see that they wear different types of outfits due to their region, but also that they stand out from one another taking pride of where they are from.

Cuisine in Ethiopia is one of a kind as they try to stick to their heritage. For each meal the people act as if it is a sacred ceremony only using their right hand to eat due to their left being unclean. The most common food is a flatbread, injera, that is served with the majority of meals. Injera is not only for eating, but it is also used as a utensil to eat with. It can be made with a handful of different types of grains which provides many flavors. Mainly it is made with an Ethiopian grain that will be fried after being fermented for an extended period of time. This allows the bread to have a tangy and sour taste. The texture is soft and fluffy almost like a pancake. Most of the meals served in Ethiopia consist of meats, lentils, and sauces and are very likely to be spicy. The main food to be served with the injera is known as wot which is a mixture of vegetables, meats, and sauces. The wot is placed on top of the flatbread so the injera can act as a tortilla.  Ethiopian Food , Ethiopian Cultural food, and Ethiopian Injera