The Dreadful Earthquakes That Devastated Parts of Croatia 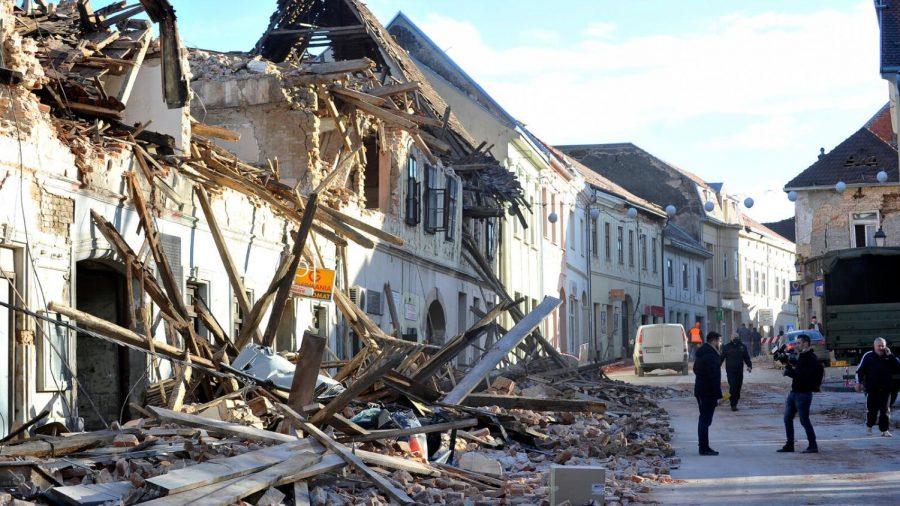 Town of Petrinja, Croatia after the earthquake of December 2020. Photo Courtesy of New York Times.

Croatia was struck by a monstrous earthquake with a magnitude of 6.4, killing seven people, and harming dozens more according to The New York Times. The earthquake struck several towns in central Croatia, and another occurred within 24 hours. Tremors spread throughout the Balkans, which consists of countries such as Albania, Bosnia and Herzegovina, Bulgaria, Croatia, Kosovo, Montenegro, North Macedonia, Romania, Serbia, and Slovenia, according to Britannica.

UPDATE: There has been an unconfirmed earthquake on January 6, 2020, only 45 kilometers away from Petrinja, Croatia, according to CROATIAWEEK. It struck sometime between 6:01 pm and 10:19 pm, with an estimated magnitude of above 5.0 on the Richter Scale. Several buildings were damaged around the area. CROATIAWEEK also says that according to seismologist Tomislav Fiket, this was just an “aftershock of the devastating earthquake of 29 December.”

There were other earthquakes throughout Croatia’s history such as the 1880 Zagreb earthquake and the 1667 Dubrovnik earthquake. The 1880 Zagreb Earthquake is often referred to as “The Great Zagreb Earthquake” because of its monmentuous 6.3 magnitude. The epicenter was Medvednica Mountain, just north of Zagreb. It affected parts of Austria-Hungary, killed one person, and damaged multiple buildings.

The 1667 Dubrovnik earthquake occurred on April 6, 1667. According to Total Croatia News, 5,000 residents lost their lives, and the entire city of Dubrovnik was raised to its present day level. One of the most loved leaders in the country, who was a Rector by the name of Simone Ghetaldi had passed. Many say that this earthquake had been one of the events towards the end of the famous Dubrovnik Republic.