A Review on Netflix’s College Admission Scandal Documentary: Are Pressures Really to Blame? 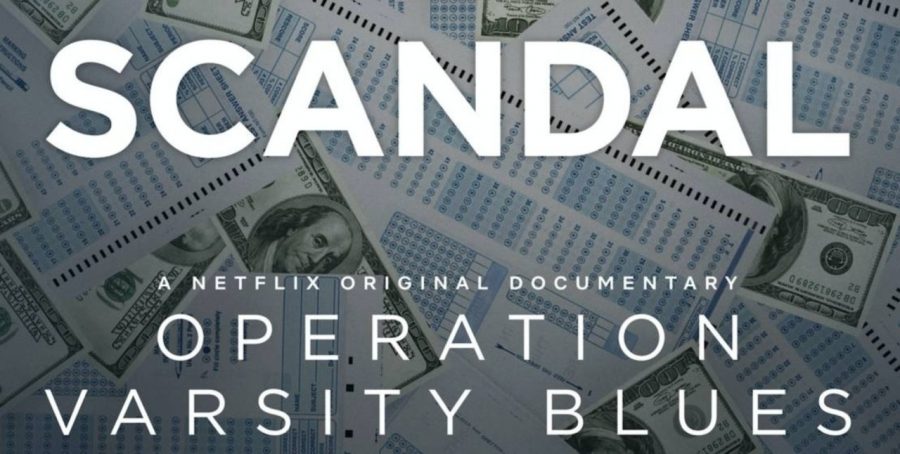 Pressure. It’s something that we all face- whether it comes from academics, sports, work, or even internal conflicts. When watching Netflix’s new covering of the college admissions scandal, a case that broke news in spring of 2019, where more than 50 wealthy well-known CEOs, actor/actresses, and entrepreneur parents were accused of paying upwards of hundreds of thousands of dollars to a man named Rick Singer, to guarantee their kids access to exclusive hard to get into schools such as UCS, Stanford, Georgetown, etc.- I noticed the common theme of blaming the incident not on the involved parties, but pressure.

The documentary opens with videos of kids across the internet reacting to college acceptance letters. An interesting start that is soon suddenly diverted to headline coverage of the college admission scandal with clips of the alleged participants heading into courtrooms or being escorted by the FBI- the most well-known two being Lori Loughlin and Felicity Huffman. The film shows real clips from these “celebrity” parents being led in and out of courtrooms, but the story is largely told by hired actors and actresses who play the role of the many well-known involved families to provide a visual representation of what really went on.

The first aspect the documentary covers is the photoshopped photos. I thought this was interesting because a huge part of the admissions scandal involved sports-related extracurriculars being faked to boost the candidate. One of the speakers mentioned colleges tend to look for unusual sports like water polo, rowing, badminton, horseback riding, etc. This makes sense, seeing as most public and even moderate private schools do not have the funds to sanction such unique and certainly expensive sports- but it also highlights yet again how college admissions can sometimes favor the wealthy and those with greater access to more beneficial opportunities. However, what got me was how the parents had these photos altered to make their kids look like actual members of these athletic teams. Whether it was posing in a local indoor pool with a ball to make one look like the shining star of the water polo team, or if it was a young girl sitting on a rowing-simulation machine to make her seem like an integral part of the rowing team, some parents truly went to crazy lengths to get their kids to look more desirable to these schools.

Furthermore, while the documentary includes real-life photos and retellings it also includes reenactments of phone calls between Rick Singer and some of the parents. “I need you to get him into USC, and then I need you to cure cancer and make peace in the middle east” is what parent, Jane Buckingham, said in a call to Singer about getting her son guaranteed admission into a school. The calls were one of the most astonishing parts of the documentary because some parents were just so blunt and honest about their privilege, and spoke in a manner that truly shows how unapologetic they are for abusing the system. This display of a lack of acknowledgment was shown yet again through one of the most famous faces of the scandal, Olivia Jade (daughter of Lori Loughlin & Mossimo Giannulli) who has been known to be pretty “dismissive” about her privilege. One clip in the film shows a girl crying about her rejection from USC, but wishing the best to the “very deserving students” who did get in. Netflix then cuts to the next clip of Olivia Jade on her Youtube channel talking about her admission to USC, saying she wasn’t looking forward to actually attending or learning there, but rather just being ready for all the partying she’s about to do.

This poses an interesting question- Is the education system based more on actual credentials and knowledge, or is the playing field skewed for the wealthy?

More to the point, what I truly wanted to know was how did this whole plan get unraveled? How did Rick Singer successfully get these kids into schools for at least almost a full year without being caught? Well, as revealed by the documentary, suspicions started being raised by guidance counselors, particularly Olivia Jade’s, who called USC and mentioned they were surprised she got in on a rowing scholarship, considering her school did not have a rowing team, nor was she known to be involved in any others. Things soon started feeling off to these colleges, and quickly, the FBI was involved- the manner in which they uncovered each individual participants was actually quite interesting and gives the film an even greater incentive to watch.

In the end, most parents ended up pleading guilty to get reduced charges, and at the very least some only got fined and 3 weeks of prison- once again highlighting how the wealthy will always have an advantage over any system, whether it be collegiate or legal. However, what compelled my attention was the last two talks about aspects of the film that surrounded who is to blame, and how this scandal has impacted the college world.

The documentary ended with a tasteful afterthought: although this whole scandal may have seemed like a bad thing in the headlines, it did “wonders” for colleges. Seeing that these wealthy celebs and CEOs would do anything to get their kids into a particular college makes it only look MORE desirable. As mentioned, the US has over 3,000 colleges but people are still competing and getting upset when they don’t get accepted to one school- and why is that? It’s because people have put such a great emphasis on what’s an acceptable school and what school is going to get you to big places when in reality, any school can provide you with proper education. These final words resonated with me the most: “In America, we love the wealthy, and we hate the wealthy- they disgust and fascinate us.” There is nothing that fascinates us more than seeing people live out the exuberantly luxurious lives many of us hope to have, but at the same time, our perverse interest creates a system that allows them to take their privilege to a criminal level.

This is where the point about pressures comes back in, the closing speakers talked about how it’s these pressures that make us want to go to these really “high-end” schools and makes the rich feel like they need to uphold their so-called “elite” status by having their kid go to a well-known school. I think differently, I feel like it has something to do more with the fact that the wealthy have been led to believe that they can abuse the system because they have the money to back them up. After all, I’m not sure how many would’ve participated in such a risky scheme if they thought they couldn’t at least buy their way out. Either way, I think this documentary covered the case well, and though I may disagree with who it ultimately placed the blame on, I think it’s worth watching to form your own opinion.