The Celebration of The Festival of Lights 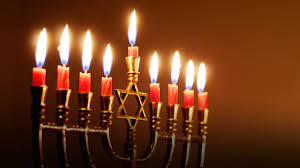 Hanukkah is a Jewish holiday that occurs each year around the end of November – the end of December and lasts for eight days. This year it is celebrated from Monday, November 29th to Monday, December 6th. A simplified backstory of Hanukkah is still very long but I’m going to try to keep it to these next two paragraphs:

Very, very, very, long ago the land of Israel was ruled by a king named Antiochus Epiphanes. Under him, Jewish people were free to celebrate Shabbat, Passover, etc and worship at the ancient temple in Jerusalem. This was until King Antiochus decided he did not want to rule over a nation of many different religions and cultures, but instead a nation with one religion and one culture. Basically he wanted everyone to live the way he lived and pray the way he prayed. The practice of Judaism was completely abolished  under Antiochus. They were forbidden from celebrating Shabbat, reading/studying the Torah, and worshipping in the Temple. A small group of Jewish people called the Maccabees did not want to submit to the king and were determined to take back their Temple. Although they were small in size, they were large in spirit and were able to defeat the King’s army. They successfully took their Temple back from the king, and were faced with the sad fact that the king had not been taking good care of the holy space. After getting to work cleaning and purifying it, the Maccabees held a glorious rededication ceremony. The word “Hanukkah” means “dedication”, and comes from when the Temple was returned to the Jewish people.

The traditional practice of lighting candles on Hanukkah was a custom that most likely started relatively early. The practice is laid out in the Talmud (Shabbat 21b), where the miracle of the oil in the Temple is described. According to the Talmud, Judas Maccabeus entered the Temple only to find a small jar of oil that had not been spoiled by Antiochus, who is now remembered as a major villain and persecutor in the Jewish traditions. The jar only had enough oil to burn for one day, but miraculously burned for a whole eight days until new oil was found, establishing that the festival should last eight days.

As a Jewish person, I can definitely say Hanukkah is one of my favorite times of the year. It is a beautiful celebration and I have always loved the backstory. It holds so much strength and pride that I try my hardest to carry with me today.  The non-religious traditions that accompany the holiday are always so joyful and the whole eight days never fails to disappoint. Some examples of those traditions would be meals, songs, games, and gifts for children. Every year on Hanukkah I have some variation of a Jewish food whether it be latkes, brisket, or matzo ball soup. As my siblings and I have grown up we have moved from presents to money on Hanukkah. Everything about the holiday blends so beautifully together and it is definitely a tradition that should be shared with as many people as possible. Make sure to wish all your Jewish friends a Happy Hanukkah this holiday season!