“Dash for Cash” Event Highlights How Teachers are Overworked and Underpaid 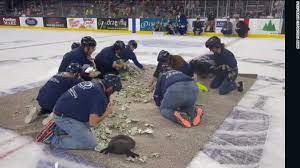 This week in South Dakota, teachers were brought out at a hockey game intermission for their chance to essentially “dash for cash.” This involved 10 educators from surrounding local schools facing off against one another as a tidal wave of one-dollar bills was spread over some slippery ice. Naturally, like cats and dogs, they scrambled to collect as much of the $5,000 they could to fund their classroom supplies.

While many onlookers laughed and filmed the event, many are now viewing that same video calling it “humiliating” and “dystopian”- and to be honest, I would have to agree. Many have questioned why the teachers could have not just been honored with the cash to buy basic classroom supplies and were instead humiliated by being turned into a ridiculous form of entertainment. South Dakota currency ranks 49 in teacher pay ranks, yet, as many point out, the issue with low wages for teachers extends beyond this state. Still, critics have remained fixated specifically on the indignity cast upon the teachers who had to take on a slip and slide in hopes of MAYBE earning enough money to afford simple school supplies. What’s even more painful is that this event is a tradition meaning that for years, educators have been deliberately embarrassed by their state’s ignorance towards education, and the critical roles they play in bringing it to hundreds of students.

The hockey team hosting the event, the Stampede and CU Mortgage Direct, apologized on Monday and promised to give $500 to all participating teachers, and pledged $15000 to be divided amongst all teachers in the area. Yet, this measly money reparation will hardly do anything to lessen the insult given to these poor teachers, nor will it fix the main problem with pay for educators.

For being responsible for educating the future generations that will eventually run the world someday, teaching is a job with one of the most disparate pay rates. More than 70% of teachers nationwide report having to pay for basic school supplies like pencils, folders, crayons, and books amongst other things to ensure their classroom has all the necessary elements for learning COMPLETELY out of pocket. Not to mention, with most classrooms being overflowed with up to 40 students, that is a big chunk of change to spare. When considering that annually 768B is spent on defense, it is clear there is more than enough in the nation’s budget to account for teachers.

Martin Luther King Jr once said, “A nation that continues year after year to spend more money on military defense than on programs of social uplift is approaching spiritual doom” – which is in all aspects extremely true. Education is one of the most overlooked privileges and gifts available. It enables us to function as proper intelligent human beings with intellectual thoughts and actions- and the second we diminish these imperative systems’ funding, we lay down the tracks for an unstable future.