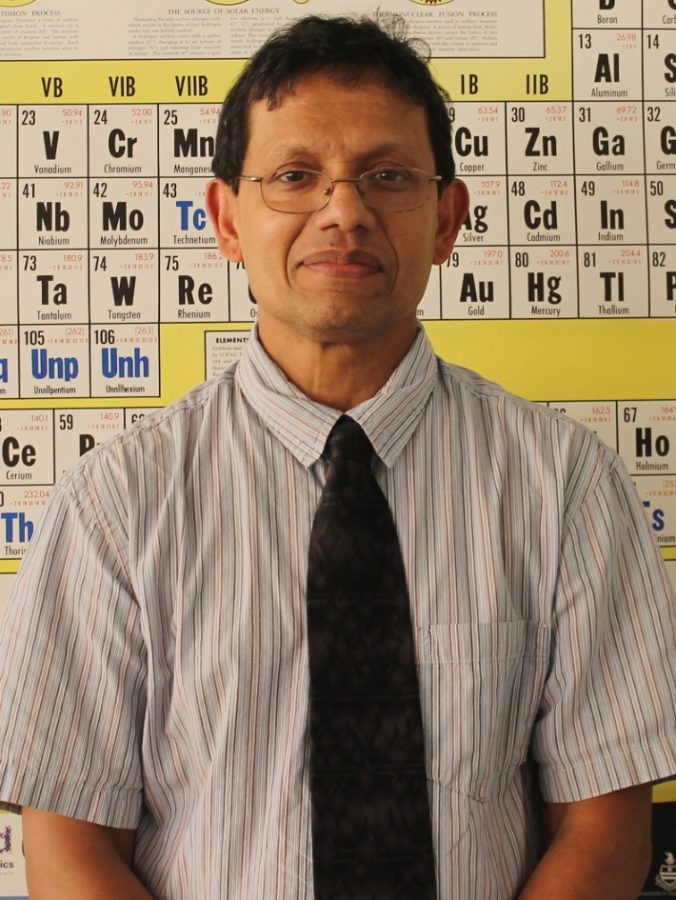 One of Winthrop High School’s most reclusive professors, but also one of the most well-known. Mr. Palamakumbura, thank you for your time. Mr. Palamakumbura, also known as Mr. P, has been teaching chemistry and environmental science at Winthrop High School for the past two years. Some may know him as a modest man, while others may recall him as a stand-up comedian. Mr. P was born in Sri Lanka, which is located southeast of India’s coast. But what exactly is Mr. P known for? I have spoken with him today to learn more about his life and his journey from Sri Lanka to Winthrop High School.

Let’s start at the very beginning. Mr. Palamakumbura was born and raised in Sri Lanka, a country famous for its breathtaking natural beauty and diverse biodiversity, earning it the nickname “Pearl of the Indian Ocean.” As children, we, like everyone else, had a long list of things we wished to do when we grew up. In high school, Mr. P aspired to be a railway engineer. He planned to attend an engineering school in order to do so. Because of the high competition for admission, Mr. P decided to major in chemistry. Was education in Sri Lanka different from that in the United States? Mr. P explained to me how the school system in Sri Lanka is comparable to but distinct from that in the United States. In Sri Lanka, as in America, all subjects are taught until the tenth grade. However, to progress to 11th grade, students must pass a national exam known as the GCE (O Level). Students in 11th grade must choose a subject stream from physical science, biological science, liberal arts, or business after completing 10th grade. As a result, Sri Lanka varies from American schools since it does not require students to study all subjects in high school. After high school, there is a countryside exam called the GCE (A Level), which is similar to the GCE (O Level).College entrance is based on GCE (A Level) test results, therefore if you wish to study engineering, you’ll need to score very high on the GCE (A Level) exam.

Mr. P is now known as a chemistry teacher, but what was his life like in Sri Lanka and America before and after that? Mr. P had an unique combination of hobbies as a child, including coin and stamp collecting and even being a member of the school cadet platoon. Mr. P was an active child who enjoyed badminton and even cricket, the national sport of Sri Lanka. Mr. P, who plays cricket during the summer, had not given this hobby up. Mr. P, like many others, enjoys watching television and gardening. Mr. P., also enjoys learning web design, which encompasses a wide variety of skills and disciplines of knowledge that are involved in the establishment and upkeep of websites. Mr. P likes horror films, particularly Amityville Horror, which I learned about earlier this year. As a movie buff myself, I’ve had countless conversations with Mr. P about horror films in order to get his viewpoint.

Mr. P found it difficult to adjust to life in America because it was so different from Sri Lanka. Sri Lanka, his homeland, was a fascinating and distinctive country due to its small size (about twice the size of Massachusetts). Mr. P could drive or take public transportation anyplace he chose in only a few hours because of its size. Mr. P found it interesting that families in the United States sometimes do not see each other as much as they did in Sri Lanka, being the small country it is. Also all of his siblings, besides one, live in Sri Lanka. Sri Lanka, unlike the United States, has smaller cities compared to the United States with the capital, Colombo, having a population of around 750,000 people. Another difference mentioned by Mr. P is that in Sri Lanka, winter does not happen, therefore the first few winters in America were difficult for him to adjust to.

What brought Mr. P to Winthrop High School? Mr. P had spent around 25 years working as a chemist in industry upon coming to America. He eventually began working as a substitute teacher in many different schools.  Before arriving at Winthrop and becoming the teacher we all know and love at Winthrop High School, Mr. P taught in Mansfield, Massachusetts. Mr. Palamakumbura is a smart and unique individual, and his journey from a small country off the coast of India to the United States of America deserves to be recognized and heard. Any opportunity you have to speak with Mr. P about his background is, in my perspective, an honor. Thank you, Mr. Palamakumbura, for allowing me to share your story.