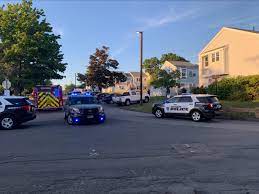 While Winthrop is a fairly small town, we still have serious issues that occur. Thankfully, we have amazing first responders that do their best to keep our town safe.

On Sunday (June 5th, 2022) Winthrop police were called to Overlook Drive around 5:30 pm. There had been someone around the neighborhood reportedly holding a knife while wearing a bulletproof vest.

Winthrop police report that the subject was experiencing a mental health crisis, and that they were using their efforts to resolve the issue with a “peaceful and safe resolution.”

As for the local residents at Overlook Drive, they were required to evacuate for their safety. The neighborhood was closed down along with Revere Street, Crest Avenue, and Shirley Street.

“This was certainly a mental health crisis and a failure of the mental health system,” said Chief Delehanty. “We have dealt with this individual numerous times and clinicians pushed him back into the community, probably sooner than he should have been. We can’t get clinicians to come out and help us during these crises even though that’s what they’re supposed to be doing with their best team and staff. The best team that night didn’t want to get involved in this incident so we had to rely on the State Police negotiators and local public health teams as well as our shift offices to deal with this mental health crisis for about seven hours.” Delehanty said underfunded mental health programs in the state put a strain on his force’s resources.

“The whole thing with police reform is to make sure that police officers don’t kick in doors and take out and arrest mental health patients but then they don’t give us any alternatives to address those issues by sending mental health professionals to the scene,” he said. “We saw failures in the past early on in the opioid epidemic but the governor and state certainly stepped up and made sure there was funding for beds and recovery programs. Now we have a mental health crisis. We need to start looking at and working towards addressing this crisis and the gaps in services that exist when it comes to mental health,”

Chief Delehanty also mentioned that he has reached out to state elected officials of the need to address mental health. “I’ve reached out to our Senator and Representative, who are always ready and willing to speak to me about these issues, and they’re aware of my concerns,” he said. “I’m sure they will be addressing those concerns on a state level because that’s where the money needs to come from.”

Fortunately, Officials said the situation in Winthrop was safely resolved by early Monday morning, with the subject transported to receive care.