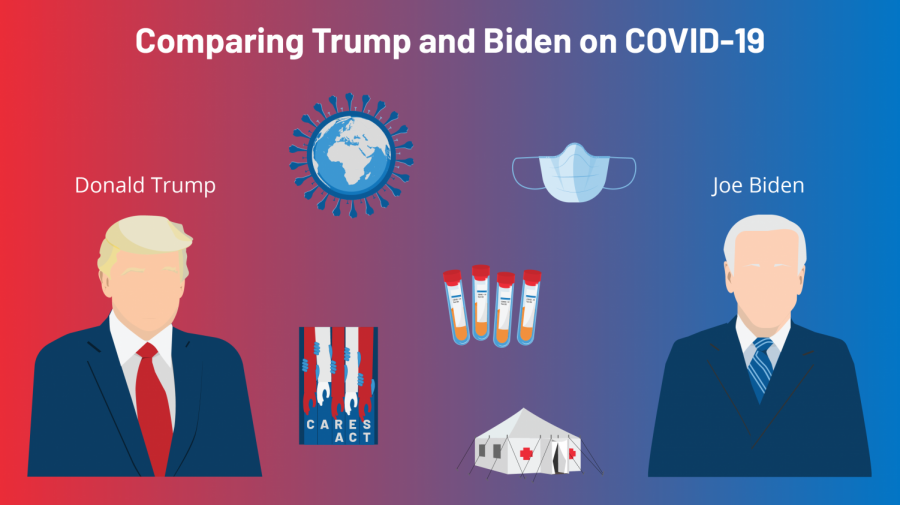 As the voting deadline approaches, it is important to be reminded of the opposing views and plans between the two candidates, Donald Trump and Joe Biden. Let’s start off by dealing with specific issues. This first week we will be discussing the topic of the COVID-19 response.

Beginning with the President of the United States, Donald Trump discusses his views and how he proposes to continue to deal with theCOVID-19 pandemic. Up until mid-September, the president and his administration have chosen to give each individual state their own response in handling the virus. For a while, Republican candidate Donald Trump has downplayed the situation. He has given contradicting messages and introduced misinformation about the coronavirus. He has advertised the use of the drug, hydroxychloroquine to treat the virus, despite the true effectiveness that the drug has. President Trump and the administration have been disagreeing with the recommendations that are being offered from the public health scientists. Trump has signed four emergency spending bills passed by congress, which aided and relieved businesses, states, and localities. To expand the production of supplies in the United States, Trump activated the use of the Defense Production Act. During his second term, Trump plans to fast track a vaccine and have it distributed by the end of 2020. He hopes to return to “normal” in 2021. Trump also plans to make all necessary medicines and supplies accessible to healthcare workers in the United States, and refill stockpiles to prepare for future pandemics.

Aside from what Trump has done during his presidency in response to the pandemic and discussing his later plans, Democratic candidate Joe Biden proposes some ideas of his if he were to win the Presidential election in November. During the Ebola outbreak in 2014, Biden was  part of the Obama Administration and their response to the outbreak. During this emergency, he played a role in leading the “Global Health Security Agenda”. According to CNN, it served as a “catalyst for progress toward the vision of attaining a world safe and secure from global health threats posed by infectious diseases.” The Obama Administration also activated the Directorate for Global Health Security and Biodefense at the National Security Council. Former Vice President Joe Biden has outlined his ideas and plans in how he will handle the current pandemic, as well. He wants to restore trust, credibility, and common purpose. He plans to mount an effective national emergency response that saves lives, protects frontline workers, families, and small businesses and  stabilizes the American economy. He finally proposed to eliminate cost barriers for prevention of and care for COVID-19. This includes making the vaccine free once it is produced.

For the people who missed out on the debate and don’t completely understand the two opposing viewpoints in regards to the pandemic, this is a simplified idea of the two different plans for the country. In order for the lives of the citizens to be stable, it is very important to understand who we want to run our country. Stayed tuned for next week’s update of the candidates views on the American response to climate change.